A Compilation Of The Next Big Things In Banking And Payments

In mid-November, BPC hosted its annual client conference, exploring the theme ‘Your Next Big Thing’. A number of keynote speakers - ranging from representatives of big banks to companies that specialise in technology development or analytics – were on hand to give participants a broad picture of developments in payment technologies and changing economic infrastructure.

Over the years, BPC has worked with clients on everything and anything relating to payments and as the industry has gone through massive change, opportunities have also been presented. Some of the questions businesses are asking include ‘where should our focus lie?’ and ‘what is the next big thing in banking?’

During the conference, speakers discussed the challenges impacting the market, what is coming down the line from a technology perspective, and how to embrace new solutions to fix the challenges of tomorrow.

Participants heard the next big ideas to take to their boardrooms and team meetings and were provided with updates on the products and services that will help them prepare for future developments. Participants were encouraged to prepare to be inspired and be ready to discuss how BPC and its clients can help them bridge the physical and digital worlds.

The first speaker participants heard from was Peter Frankopan, an esteemed historian and writer, who discussed the history of economic prosperity. He began by discussing how economic growth has deep roots and how despite the recent pandemic causing unusual difficulties, the rise of economic stability in the East has been developing for many years.

He justified this view by stating that the East has remained constant on leadership and fundamentals of economic growth, allowing for its rise in economic power. Frankopan emphasised the importance of embracing new technologies for economic growth, discussing how the most economically stable states develop emerging technologies in relevant markets.

Participants then heard from Ron van Wezel, strategic advisor for Aite-Novarica Group. A challenge he highlighted for businesses in the current climate was banks competing with new players in the market who are working with original infrastructure and no legacy.

van Wezel suggested the way to resolve this is to respond to the ever-changing demand within the market, maintaining current models and structures using technology such as APIs (which make inter-organisational integration frictionless), and looking out for technologies that develop new payment processes. Developing payment methods such as ‘buy now pay later’ create higher sales for merchants, making technology vendors desirable.

Patsiansky stated the case for super apps, saying they transform traditional applications, making them simple, easy to use and a final destination for a broad range of services. They also bring a capability to embed further payment capabilities and - as mentioned earlier - making payments easier results in higher consumer spending.

Zil Bareisis, head of retail banking at Celent was invited to discuss open banking and embedded finance. Open banking, as Bareisis explained, is when banks share information with third parties to deliver a service, allowing consumers to collect loyalty from their favourite companies and complete transactions in one place, a step further in modernising banking.

Embedding finance is when companies can have their own ‘finance’ for the convenience of their customers. Bareisis described open banking as the next big thing and said the risks involved are outweighed by the risk of not implementing the technology.

Next, Leyla Mamedova - head of cash management for Pasha Bank, Vasil Dimitrov - CEO of DSK Mobile, and Terry Jones, managing director of Leading Edge Technologies discussed their experiences with smart cities, and their achievements with the required technologies.

Open/closed loop payments were discussed by all, with Mamedova stating that she thought the next big thing was the move from cash to cashless. Jones believed it was the simplicity of relying on cards for everyday transactions that would make this technology successful, while Dimitrov stated that making customers trust card payments would determine open loop technologies’ success.

de Deyn introduced Oracle cloud infrastructure, observing that when banks are moving to the cloud they require better security and payment compliance. An innovative development was discussed by Agha, whose company has created a banking system that focuses on small businesses and their requirements – known as ‘SME in a box’. Grigoriev highlighted the importance of time to market, speaking about Smart Visa’s four week update.

Asked to share his views on cryptocurrency and the associated challenges and benefits for banks was Marten Nelson, founder of M10. He began by explaining that digital currency is money without a physical form, stored digitally.

He then focused on central bank digital currencies or CBDCs and said the main benefits of this digital currency are improved payment efficiency and settlement security. Nelson also discussed stablecoins and referred to the risk taken when using them to invest due to the uncertainty of who they are backed by. He finished by reiterated that cryptocurrency is the next big thing in bridging real life and digital.

Finally, Oleg Patsiansky was invited back to explain tax collection for governments with instant payments, social benefit payments and treasury payments. He noted that this requires multiple relationships between central banks and governing bodies and explained the multiple, complex levels involved in government payments, adding that customers using this system can expect very fast reaction times due to the multi-node architecture.

He then stated that the future of this technology lies in QR code based payments and concluded by emphasising (in relation to social benefit payments) the capabilities of the technology to provide real time fraud prevention and spending control.

We have made all the content of the BPC Client Conference 2021 available for you to watch on demand. You can now request your access: 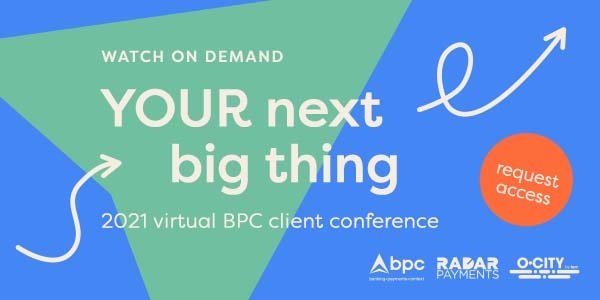 next The next big thing...