“The city is not a concrete jungle, it is a human zoo”, Desmond Morris, the famed British zoologist once said.

With two-thirds of the world’s population expected to be living in cities by 2050, according to projections of the UN, urban areas will be facing an increasing amount of environmental and infrastructural pressures to come.

One way to meet these growing challenges is by taking the impact smart city solutions can have on people’s lives, serious.

In this post we’ll zoom in on two real life city problems which are currently being solved by using technology efficiently. Technology that is used as an enabler to make better decisions and boosting the liveability of cities by making them more responsive.

Apparently many of us would rather go to the dentist than do taxes. People regard doing their taxes as something “so complex” that they no longer see it as doing their civic duty, but as an annoying part of a relationship with the government, Dan Ariely, Duke University behavioral economics professor said in an interview with Bloomberg.

If governments prioritize lowering the tax burden with the help of smart technologies and replace them by more digital flows, it’ll help boost the standard of living of urban living.

One city where this is happening is Shanghai (China). Here citizens can use Citizen Cloud, a cloud-based platform that also functions as an application. The application aggregates and provides easy access to over 100 government services, including keeping track of tax records.

All over the world, people accept excruciating commutes as a necessary evil. Too often, these long, soul-destroying journeys corrode health, environment and relationships with friends and family.

Using technology smartly and efficiently can be a game changer when it comes to improving commuter times for city inhabitants. It can also decrease huge losses of economic value when commuters spend too much time on finding and joining the right bus or tram.

One of the cities where technology is working to improve commutes and thus citizen’s lives is Cape Town, South Africa. Here the company WhereisMyTransport has stepped in to support Capetown in its drive to offer some 5,000 daily commuters better insight into their commute. Through real-time engagement and Estimated Time of Arrival (ETAs), informal route mapping and integrated journey planning, residents and commuters can easily access and plan transportation. At the same time the company is mapping and integrating thousands of small, medium and large operators of transport in cities with the use of data. Having an open data strategy is part of their journey.

At BPC we believe that improving real life must be the starting point and goal, when creating smart cities. Digital should be the enabler. BPC sees an opportunity to bring together stakeholders of all walks of life to either initiate or support such ecosystems. 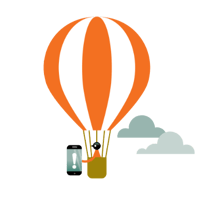 If you want to learn more about the problems that smart cities are solving for their citizens, download our report.